QUIC is an alternative method to transmit web content that doesn't use TCP and forms the transport basis of the nascent HTTP/3 protocol. While QUIC/HTTP/3 does include some performance enhancements versus HTTP/2 and HTTP/S, the protocol is not yet managed to the same extent by the Zscaler Secure Web Gateway (SWG). It is therefore recommended to block QUIC and force communications into HTTP/2 or HTTPS which are fully managed by the SWG.

QUIC is a UDP-based protocol so the Cloud Firewall is required to block and force the client to use a different protocol like HTTP/2 for web traffic.

If the default Cloud Firewall rule is enabled to block all that is not allowed and no rule explicitly allows traffic associated to QUIC then QUIC will be blocked and no further action is required.

If the Cloud Firewall is configured to default allow then the core best practice policy to block QUIC is a rule that has the network service “QUIC” selected with the action to “Block/ICMP”. 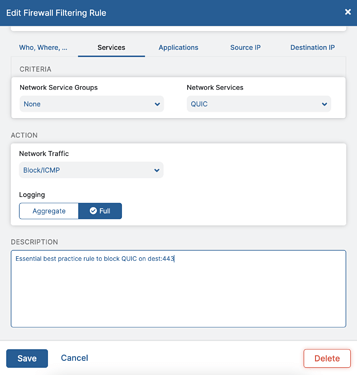 The selection of the ICMP block not only drops the UDP packet but also sends the client an error message of Type 3 (Destination Unreachable) and Code 13 (Communication Administratively Prohibited) via ICMP which allows the client a potentially faster switchover to another web transport method. This in turn results in a better user experience with little lag as the client learns quickly that QUIC is not working.

The deep packet inspection identification of traffic is a good way to have a very high and independent certainty of any given application – including QUIC. Using the network application “QUIC” in a subsequent rule (so in a new, lower ranked rule addition to the network service-based rule recommended above), is a good way to identify QUIC regardless of port used.

So it is recommended to use the network service-based identification of QUIC first and with the highest possible rule rank according to desired policy. Then have the network application identification of QUIC at a lower rule ranking and thereby applying to fewer possible flows. This type of recommendation for the use of a network application-based rules and applying these rules at a lower rank order and after rules with first-packet identifiable flows (like those with network services or application services) is a standard recommendation in Cloud Firewall.

Related topic: When "allow due to insufficient app data" log entry value appears and when it does not